On 2 March 2016, Chile, in its capacity as President of the Fifteenth Meeting of the States Parties, held the first International Pledging Conference for the Implementation of the Anti-Personnel Mine Ban Convention. The aim was to renew  and strengthen commitments to the principles of the Convention and resources for implementation including through pledges of financial support to mine action, as well as pledges for the ISU’s work plan and Sponsorship Programme.

A total of 69 delegations, including nine represented at the ministerial level, were present at the Pledging Conference including 52 States Parties, 2 States not party, 7 non-governmental organisations and 8 international organisations.

The First International Pledging Conference for the Implementation of the Anti-Personnel Mine Ban Convention, A Mine Free World by 2025: The Last Stretch, hosted by the Chilean Presidency, was held in Geneva on 2 March 2016.

The Conference was chaired by H.E. Heraldo Muñoz, Minister of Foreign Affairs of Chile and opened with a high-level panel that included,

High-level guests on the panel shared their vision on The Last Stretch towards implementation of the AntiPersonnel Mine Ban Convention by 2025.

Participants commended Chile, the Convention’s Presidency, for taking this initiative and for providing the impetus needed for a successful implementation of the Anti-Personnel Mine Ban Convention in 2016. 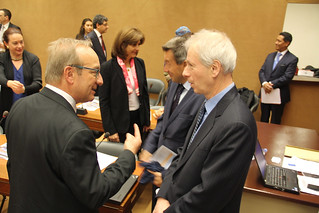