On 27 February 2018, Afghanistan as President of the Seventeenth Meeting of the States Parties, held the Third International Pledging Conference for the Implementation of the Convention. The Conference was chaired by H.E. Suraya Dalil, Ambassador of Afghanistan to Switzerland and the UN in Geneva, with the Chief Executive of Afghanistan H.E. Abdullah Abdullah inaugurating the Conference.

The Pledging Conference sought to commit resources to the ISU 2018 work plan, the Convention's Sponsorship Programme, and towards costs of the Meetings of the States Parties.

A total of 41 delegations attended the Conference including 33 States Parties, 1 State not party, and 7 international and non-governmental organisations.

The first part of the Conference featured presentations by the Anti-Personnel Mine Ban Convention Implementation Support Unit (ISU) on its budget and work plan for 2018, by Australia, in its capacity as Coordinator of the Anti-Personnel Mine Ban Convention’s Sponsorship Programme on the priorities for the Sponsorship programme in 2018 and by the UN Office for Disarmament Affairs on the status of assessed contributions for the Convention’s Meetings of the States Parties.

In total, 41 delegations were present at the Pledging Conference, including 34 States Parties, 1 State not party and 6 non-governmental and international organisations. Sixteen (16) States Parties made pledges to the Implementation Support Unit amounting to approximately CHF 544,000 and 3 States Parties pledged CHF 47,500 for the Anti-Personnel Mine Ban Convention Sponsorship Programme. 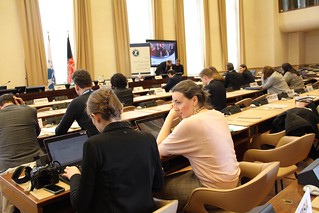