Uganda signed the Convention on 3 December 1997, ratified it on 25 February 1999, with the Convention entering into force for Uganda on 1 August 1999.

In its initial transparency report submitted in 24 May 2002, Uganda reported stockpiled anti-personnel mines under its ownership or possession or under its jurisdiction or control.

Notwithstanding the obligation to destroy all stockpiled anti-personnel mines, the Convention permits the retention of the minimum number of anti-personnel mines absolutely necessary for the development of and training in mine detection, mine clearance, or mine destruction techniques.

As of 2012, Uganda has reported having retained 1,764 anti-personnel mines for these permitted purposes.

In its initial transparency report submitted in 24 May 2002, Uganda reported stockpiled anti-personnel mines under its ownership or possession or under its jurisdiction or control.

In its transparency report submitted in 2008, Uganda reported that it had completed the destruction of all stockpiled anti-personnel mines.

In its initial transparency report, Uganda reported areas under its jurisdiction or control in which anti-personnel mines were known or suspected to be emplaced. In accordance with Article 5 of the Convention, Uganda undertook to destroy or ensure the destruction of all anti-personnel mines in these areas as soon as possible but not later than 1 August 2009.

In 2009, Uganda submitted a request to extend its mine clearance deadline. The request was granted at the Cartagena Summit on a Mine-Free World and a new deadline was set for 1 August 2012.

On 10 August 2012, Uganda informed the 11MSP President that due to technical difficulties, Uganda was not in a position to declare completion and would need approximately three additional months to conclude mine clearance operations. Uganda further indicated to the 11MSP President that it hoped to be in a position to declare completion of its Article 5 obligation by the Twelfth Meeting of the States Parties

On 28 November 2012, Uganda announced that it had fulfilled its obligation under Article 5 of the Convention. Uganda submitted a declaration of completion to the Twelfth Meeting of the States Parties.

Uganda has indicated having significant numbers – hundreds or thousands – of landmine survivors; and undertaken to provide for the care and assistance of mine victims.

Uganda is also a State Party to the Convention on the Rights of Persons with Disabilities.

Annually and no later than 30 April, each State Party is to update information covering the previous calendar year. The latest Article 7 reports for this State Party can be found on this page.

Article 9 of the Convention states that “each State Party shall take all appropriate legal, administrative and other measures, including the imposition of penal sanctions, to prevent and suppress any activity prohibited to a State Party under this Convention undertaken by persons or on territory under its jurisdiction or control.”

Uganda is still required to report on established national implementation measures or whether it considers existing legislation to be sufficient.

(2012) At the Twelfth Meeting of the States Parties, Major General Julius Oketta, Director of the National Emergency and Coordination Centre, declared that Uganda, with support of international partners including Danish Demining Group, had fulfilled its Article 5 implementation obligation. 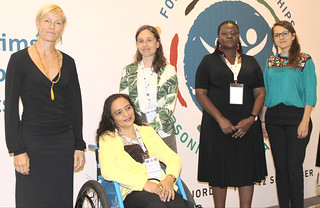