On 26 February 2019, Norway, in its capacity as President of the Oslo Review Conference on a Mine-Free World, held the fourth Pledging Conference for the Implementation of the Convention with the aim to commit resources to the ISU 2019 work plan, the Convention's Sponsorship Programme, and towards costs of the Meetings of the States Parties.

The Conference was chaired by H.E. Hans Brattskar, Ambassador of Norway to the United Nations in Geneva and inaugurated H.E. Audun Halvorsen, Deputy Minister of Foreign Affairs of Norway.

A total of 41 delegations attended the Conference, including 31 States Parties and 10 international and non-governmental organisations.

The following States Parties and Organisations presented pledges and/or statements, 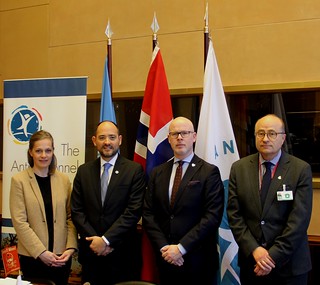